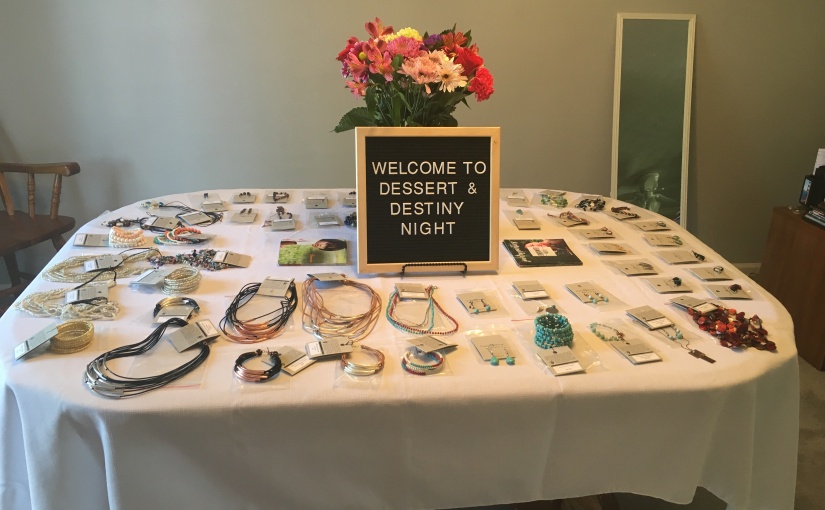 As many of y’all know, I am an advocate for a nonprofit organization called Destiny Rescue. Their main goal is to rescue young girls from the sex trade overseas.

I got involved in Destiny Rescue when they came to speak in chapel at my school this past year. After hearing their mission and real stories of rescued girls, I was moved to do something. But that little voice in my head (AKA Satan) told me “You don’t need to do anything, someone else will do it.”

After chapel, they had a table in the mallway of our student center where you could buy jewelry to support their efforts or just get more information about what they do. I debated with myself on if I should go to the table or not. I don’t know why I was so scared to just go to a table. I think it was partly because of the fact that I could get involved in the organization somehow and I had never done that before.

I finally put on my big girl pants and walked over there. I browsed through the jewelry they had available and bought a bracelet. Then the girl working the table asked me if I wanted to sign up to become and advocate. The warmth in her smile made me feel so at ease and I took the opportunity to say “yes.” I was so glad that I pushed that voice in my head to the side and trusted God to take that first step.

I didn’t hear anything from them for about 2-3 months. I was slightly confused. Had I made a mistake? Did they even look at the sign up sheet? Then one day I got a phone call from Sharon. She asked me about why I signed up to be an advocate and explained some of the ways that I could get involved. The main thing that I was interested in was the “Dessert and Destiny” jewelry party.

All of the jewelry they sell is beautifully handmade by the survivors of the sex trade. They have earrings, bracelets and necklaces in a wide variety of colors and price ranges. I emailed the coordinator 3 weeks before the date that I wanted to have my party and they sent me all the necessary supplies free of charge. They even included a card swipe you can plug in your phone! All I had to do was make the desserts and invite the people.

I took to Pinterest to find some dessert recipes for the party. I decided on fruit pizza, frozen cheesecake bites, buckeyes, dessert kebabs and raspberry sherbet punch. I really enjoyed making all of the desserts and preparing for this night!

My two best friends were halfway across the country and world (California and Scotland) on the day of my party so they obviously couldn’t make it. So Sabrina came over before she left to buy something and I sent pictures of the jewelry to Betsy so she could pick something out as well! I’m so thankful for such supportive friends that even if they are literally across the world, they are still there for me. Love y’all!

I had my Dessert and Destiny night this past Saturday, the 15th. The desserts were made, the jewelry was set out and I was ready for the people! I prayed right before it started that even if only one person showed up that I would be okay with that because God’s will would still be done.

I had two girls from work come and buy several pieces and eat the yummy desserts! Thank you Erica and Mallory!! Y’all rock. They were the only two that came and I’m not going to lie, I was disappointed at first. But I had to remind myself that it’s not about how many people showed up, it’s that I had the courage to take the initial step to say “yes” to becoming an advocate 6 months ago. It’s that Destiny Rescue was introduced to 40 something people via Facebook. It’s that the money that was raised is going to help rescue girls from the sex trade and if I hadn’t had the courage to take the first step, none of that would have happened.

Here is what I learned from this whole experience:

If you weren’t able to come to the Dessert and Destiny Night, don’t worry! I still have plenty of jewelry available for purchase! I just have to ship back the remaining jewelry by July 31st, so if you want to purchase something, please don’t hesitate to contact me and I can send you pictures of the jewelry or bring it to you!

Check out Destiny Rescue’s two websites! (The first one is the link to their shop, which has some of the same jewelry that I had available, if you’d like to purchase them online or you can donate on their main website.)

Again, thank you so much to everybody who prayed for this event and invested financially. Your support is going to help so many young girls be rescued and introduced to the unconditional love of Christ.

I'm from Lexington, KY, go to school at Indiana Wesleyan University ('18) and am studying Athletic Training! I'm obsessed with all things farmhouse/vintage decor and I am an advocate for Destiny Rescue, a nonprofit organization that strives to free young girls from the sex trade. Welcome to my blog! View all posts by akentuckygirlsthoughts

This site uses Akismet to reduce spam. Learn how your comment data is processed.